This is the place where I’m talking about how great my Tusculum Experience class is. 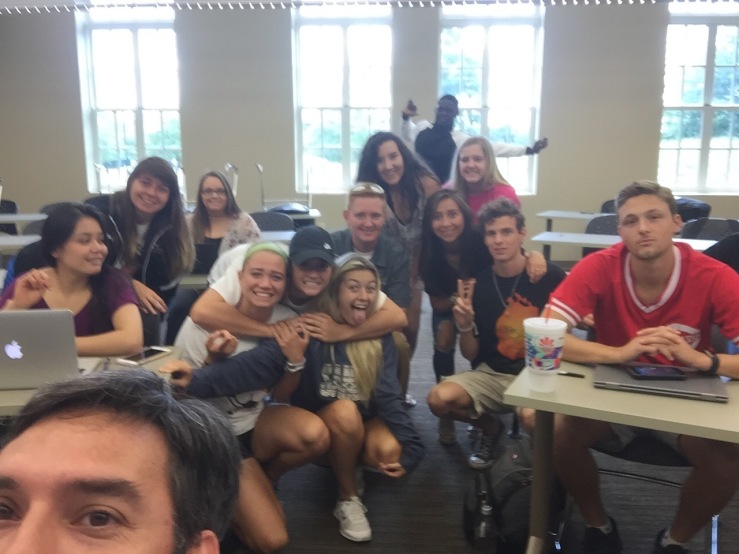 I also realized that I never took a selfie with the group last week.

(not pictured: a lot of athletes who sit stage left and who were just over it, and not unfairly so)

(1) Not well. Not well at all. I’m only posting one pre-eclipse post, and it’s less than 24 hours until peak eclipse in Greeneville, Tennessee.

(2) Of course, I might not even be making this post at all if I wasn’t teaching a physical science course to non-majors, and if I wasn’t making some early ideas on astronomy wasn’t a key part of the thing. Shout-out to #nsci105. I don’t even know if the youth says “shout-out” anymore.

(3) Of course, I kind of wanted to make such an eclipse post to be some sort of hot take about the pointlessness of eclipse glasses, and Lifehacker just straight-up stole that hot take from me.

I was in middle school the last time a major solar eclipse passed over my hometown. Some teachers supplied us with glasses and others helped us build viewers from cereal boxes, and we went outside for the big moment. It was okay, I guess. But when I got home, my mother told me how she saw the eclipse.

She told me that she stepped outside with her co-workers, and ended up sitting by a tree. And she noticed the shadow of its leaves on the ground. Everywhere there was a little gap between the leaves, each spot of light was in the same crescent shape as the eclipsed sun.

Curses to Gizmodo Media! Curses to them!

And uniqueness in the shadows EVERYWHERE.

Get you some pinhole camera action going and have some fun.

My favorite guide to pinhole camera construction is Emily Lakdawalla’s blogging for the Planetary Society, and CaLisa Lee’s video does the job super well too. Yeah, it’s targeted for kids. But I’ll do the same stuff too.

There are other sources for eclipse projection from the American Astronomical Society, the Jet Propulsion Laboratory, and good friends at the Upper Cumberland Regional Science Initiative. The Capital Weather Gang at the Washington Post wrote about this, too.

(Late addition: the alpha physics blogger, Chad Orzel of Union College in New York, also wrote a low-tech pinhole camera optics explainer. I’ll always link when Orzel explains something, even if I have to edit the post after the fact to do it.)

I’ve been joking that I’m going to go without eclipse glasses; that’s a lie, I’ll totally have a pair on me. But I am going to have a ton of small cards for pinhole cameras, and I’m going to have at least one surface for watching the shadows come through them.

(4) In addition, NASA has a little smartphone app I’m just learning about called Globe Explorer (part of “an international citizen science initiative to understand our global environment”), and they’re wanting data tomorrow during the eclipse. It can be as simple as taking pictures of clouds to recording reliable temperatures. But it’s accessible to all. If the idea of being a citizen data-recorder appeals to you, download the thing and join in.

(5) I’m not trying to get on the road and travel through eclipse traffic (however eclipse traffic proves to be) while my teaching load is slightly nutty. I’m staying in Greeneville, even though I’m not going to get 100% totality. I have dear friends at Pellissippi State (one dean in particular) who will be Tailgating in Totality, and my old colleagues at Tennessee Tech are throwing a full Totality Awesome Eclipse Fest. (Click through that page and you can see explanations from my department chair at Tech, Steve Robinson, who’s way better explaining this stuff than I am.)

I’m disappointing all my friends equally by staying put, which is maximum fairness for all concerned.

(6) But I am the Eclipse Expert for the Tusculum event (sponsored by the United Way of Greene County, thanks you guys) at Pioneer Stadium, starting at 2:00 PM. And, if NBC News is to be believed…

…I am personally contributing to, and even leading, a mass loss of productivity at Tusculum College.

If you’re in the neighborhood (and not driving pell-mell to reach totality), come be unproductive with me.

(Shared simultaneously to my Facebook news feed. It kept a place atop that feed for about 9 months. I use the thing again, but only to promote quiz bowl stuff and self-promote, which lately have been one and the same.)

So. I think it’s been apparent I’ve been starting the long goodbye to Facebook for a while. Let’s make it official.

I’ve been on FB for what clears eleven years at this point. It’s mostly been good. I’ve been able to reconnect to a host of people and engage in conversations with people across the country. The power behind any technology of this sort, to me, is the capacity to extend our human connections. There are points when, as I talked about this place in the past, I might have sounded very Zuckerberg-like when describing the power and potential of this thing.

I really don’t even think I need to tell you what’s changed about Facebook. Always and forever, I’m going to wish one and only one thing: that the people in charge of these wonderful social networks that have turned up over the course of the last decade haven’t largely sold out to Wall Street. Caring about stock value means you will do everything you can to jack up the advertising dollars and if that means that real, human engagement takes a back seat, so be it. That damage has been steady and ongoing.

I will tell you what has gradually changed for me, and what I honestly feel like has run its course: the broadcast mentality I’ve taken towards social media, and Facebook in particular. My friends network on this thing got large enough at one point that I was friends with people I didn’t genuinely know, and that didn’t want to get to know me. If you feel like what you say can have influence and be positive, well, hey, that’s good news. There was a spell when I could share a random news article and get 100 likes on it and get serious, thoughtful conversation going in the comments, with a level of depth that never reached flame war or trolling status. That engagement was always what I was most grateful for. That engagement only happens in the rarest of circumstances now.

And I honestly think that’s part of Facebook’s design, as they more and more actively serve in a news feed what you “want” to see and prevent you from having control. The effectiveness of my own sharing on Facebook has dropped off the map. There was a time when I’d share a thing on Facebook and Twitter and it would get hundreds of views from Facebook and tens of views from Twitter. That ratio has now completely flipped, as faithful friends on Twitter share and reshare my stuff and shares on Facebook fall into a black hole. When Twitter has always been more effective in putting my stuff in front of new people outside my circle of friends anyway, I look at Facebook putting the kibosh on my sharing even with my friends and say “y’know, you really don’t care about me; what’s the point?”

For now, the conversation is going to continue on Twitter. For now. I don’t even really feel like Twitter is a long-term solution (and this goes beyond the standard concerns about safety and harassment; for crying out loud, the service has been murmuring about pushing a monthly $99 subscription fee to boost “influencer” timelines; if that happens, they’ll kill their own golden goose and wreck the benefit I take from them besides). But it’s the solution right now that gives me a critical mass of people I’m talking to, and in many ways it’s been the social network that’s enabled the transformation of my scholarship and my professional life over the course of the past few years. I’m “having a think” (to steal Kate Bowles’ phrase) about Mastodon and conversation that’s more authentic. That may not even be a long-term solution either, although I’m as positive about Mastodon as I have been about any social media since that group of us at Shorter first got online in 2006. I’ve also turned up on Instagram and I’m sharing things every now and again over there, although my preferred mode of communication is words and not pictures. And chuckpearson.wordpress.com does exist and will get stuff posted to it from time to time; if ever there’s major news in my world, it will appear there.

And this is a slow goodbye. There are still a host of people I only see on this thing and nowhere else. There are quizbowl communities where Facebook is my primary mode of communication, so I won’t disappear entirely. I use Facebook Messenger extensively, and honestly at least that isn’t going to change for the foreseeable future. This profile will remain visible; things can be shared with me, I’ll still review, I may even comment on a thing you post every now and again; but the buffer has been shut down and the sharing of things on this profile page will be rare.

Nobody (but Facebook themselves) pushed me to this point. If you have any fear that you’ve offended me or put me out in any way, don’t. I’ve decided that the time I spend on Facebook can be better spent in other ways. That’s all.

Messages are still open; don’t ever hesitate to say “hi.” But I’ll be on your news feeds less and less for a while.