Real Professional Development Goal, August 2016-forever: make this the last of these things I ever write.

I have been offered a position at Virginia Intermont College in Bristol, VA, to teach chemistry and physics and play a key role in building that school’s natural science department. The position and the surrounding professional development is nothing short of the perfect job for this point in my career.

For those of you who came into my orbit sometime after that, and don’t know how that story ended, it ended with financial problems overrunning the college, and getting laid off not even three years later. It was not a fun time.

Now for you to be convinced that I’m crazy: I still believe what I said five years ago to be true.

With all respect and love to my friends in Georgia who were so good to me, but who I left to chase what was to me a dream of a job: Virginia Intermont was where I found and made a home. I thought I loved the mountains when I lived in Rome (Georgia, y’all) and worked at Shorter. In Bristol, I knew. I saw this forgotten and less fashionable part of the country and, being a less fashionable person myself, I found a real sense of place.

I went all-in on Virginia Intermont because I saw what was possible for that kind of school in that season of time when I was at Shorter, how the unlikely student could grow into the leader and the visionary. I built an entirely-too-vivid picture of what that looked like at VI. I wanted to see that vision become a reality, so badly that I bought a house and made Virginia Hill my home.

What I found in exchange was the truest sense of learning community, unlike any experience I have ever had. It was the greatest of privileges to be a part of it. The students I taught at VI are people I cherish and love – every last student, through the good times and the bad that we shared (and God knows, if you’re that close, you’re going through everything together). We went through as difficult a transaction as anybody in education should ever deal with. They have been faithful to me, and I hope that I have been as faithful to them. Those students, far above and beyond anything else, were worth that move for me.

But they weren’t the only benefit. The other thing I realized in my time at Virginia Intermont was how much of an island I had been on in the work that I did. The very first time I went to an Appalachian College Association Summit, and had time to talk to colleagues from places like Ferrum and Montreat and Ohio Valley and Pikeville and Brevard and West Virginia Wesleyan – and realized that these people had been talking to one another for quite some time about the same troubles I had as a faculty at a resource-limited small private college in the South – I realized what professional development what would look like for me over the long term.

Losing Virginia Intermont didn’t just mean losing the school and the students – it meant losing colleagues over several states in this precious region who had wisdom to share and who knew what the difficulty in this time of history for small private colleges looked like. It was such a benefit over those three years. It ended abruptly – I was scheduled to attend an ACA Teaching and Learning Institute in June 2014, before VI closed in May 2014. The abruptness was as hard to take as anything.

The time I spent at Virginia Intermont confirmed some things that I valued and revealed new things. I always knew how much I valued the time spent with students and how much I appreciated institutions that encouraged the development of genuine learning community. I really understood – for the first time in my young-punk career – how much I had to learn from those who had done the same kind of work I had, at the same kinds of institutions I had.

And – there is no other way to say this – I fell in love with Central Appalachia. And I longed to make that place home.

(3) I have been ridiculously fortunate to have been at Tennessee Technological University for the past two years. I had wanted to chase after better, more active learning in my classroom for a long time; I knew the benefits, and it’s not like I didn’t try to draw communication out of my students in the classroom, but I was exceptionally comfortable in a traditional chalk-and-talk mode, and in a position where I was teaching three different courses at once, as much as I loved that diversity of work, I didn’t really find myself in a position where I could push the active classroom as much as I wanted to – or, really, as much as I needed to.

Observing Steve Robinson and Paula Engelhardt in the process of implementing an active learning curriculum for the algebra/trig-based physics sequence has been, in nearly every sense, a better educational experience than anything I got out of a postdoc. This is the stuff that will make me better as a professor: finding ways to make students productively uncomfortable in a classroom setting, and creating an environment where they aren’t just hearing information but internalizing it and making knowledge their own. I don’t have all the answers, and maybe I have a ton of experience with some of this stuff, but it’s so much more valuable when the student makes an observation, draws a conclusion, carries a new experience with them to inform how they see the world.

And I have been privileged to work alongside this whole department – but especially with Mary Kidd, Mustafa Rajabali, and Adam Holley in making this curriculum work for the wider student population. The one time before in my career I worked alongside another physics educator, I was a problem child and overopinionated and I am sure I torched more than that one bridge in the process. I probably was the same here, but rather than putting me off, these sweet people listened and challenged me right back, We have been, I hope, iron sharpening iron day in and day out. I could not possibly have had better colleagues these past two years.

There was a thought that simply doing this work, and refining this work to make it more and more effective, would have been the most valuable thing I could do going forward. I did have the opportunity to remain at Tennessee Tech, within this department, and I’m grateful for all the people here who supported me and invested so much in me. At several points in April, I was seriously thinking of what settling in Cookeville would look like.

That would have been bittersweet. As good as it was to be wanted, it would have involved narrowing my vision – the career spent bouncing between disciplines would be over, the advising of students at various points on academic and pre-professional paths would be over, the focus on the wider institution and on higher education would have been over. So many things that I have valued so deeply would no longer come with that place. Quality teaching is so important, and being in a role focused on quality teaching would be worthy. But there were so many things I felt were undone.

And there was that tiny little issue of a place, a place where my eldest child was finding home as well, still carrying an attachment. And wondering if there was a way back.

And I reached a point where I didn’t think there was a way.

And then things started to happen.

(4) I honestly didn’t know what to think when I received that first email, except an old colleague was there and she had been pretty high on the thought of me getting the job and joining the faculty. I honestly thought the email came too late; we were ready to decide to stay put; I had other interviews at similar schools and found in one way or another that they were after somebody to fill a very narrow faculty line and could do as well to hire a young punk straight out of grad school (like I once was) than somebody who had been around the block a time or two.

And then a phone call. And a serious conversation. And a recognition that I came from a different place and a different experience, and a recognition that they were looking for a different professor and a different impact. We agreed to keep talking. And soon.
The interview, honestly, wasn’t like any interview I’d ever had in my career. It was comfortable, from the very first moment. Many of the formalities started to be dispensed with early. I was recognized, not as somebody who was a warm body seeking a job, but somebody who had a unique skill set, a unique background, and who could do unique things.

I started to understand that they didn’t just want a physicist, or a chemist, or even a molecular biophysicist. They wanted me – who I had been, who I am now, who I could become. And I could get a picture of becoming a far better scholar in this community than I am now.

Future colleagues – for that’s what they turned out to be, and what I was able to see them as from even the first conversation – spoke directly, and honestly, and with hope. Students spoke to what was good about their experience, what needed to improve, and why they loved the place.

I’ve left interviews before being completely confused about what the job was, and what my responsibilities might be. Here, I saw a role, and I saw it completely.

I have never been so excited leaving an interview (even as I left it to scramble back to Cookeville to give an exam). The place was not perfect, but the imperfections were very clear and not hidden at all. The job ahead was clear. And I hoped I’d be given the chance.

(5) When the dust settled, on April 21, I had an offer from Tusculum College, just outside Greeneville, Tennessee, a little more than an hour away from Bristol, on the edge of the Cherokee National Forest on the North Carolina state line.

It was an offer to join their faculty as Associate Professor of Natural Sciences, with teaching responsibility across physics, chemistry, and – my word, is this really happening? – molecular and cellular biology.

There are a host of other benefits and responsibilities that come with that. But, more than anything else, it’s a return to a faculty position serving a small, teaching-centered liberal arts (and, Tusculum would remind you, civic arts) college in the heart of the Appalachian Mountains.

It’s work I’m prepared for in every way, shape and form.

I am as grateful as you could possibly imagine for the opportunity.

My prayer now is very simple: for me, forever, this will be what it means to go home. 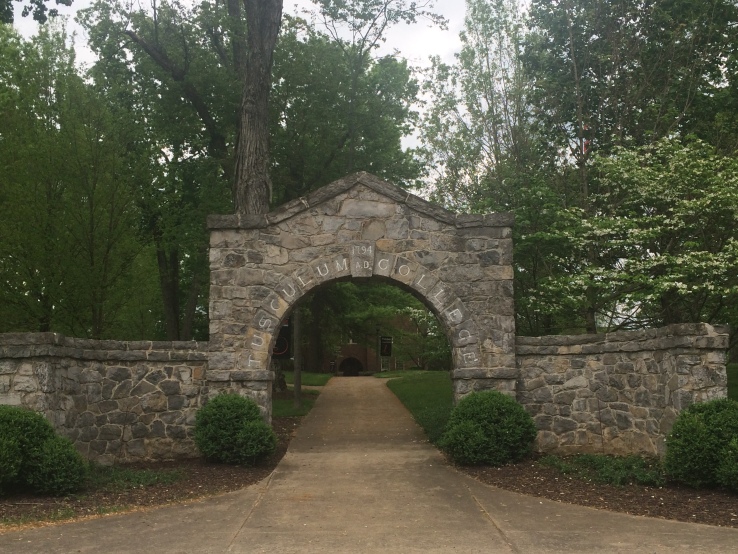